The Creation And Impact Of The Millenary Petition 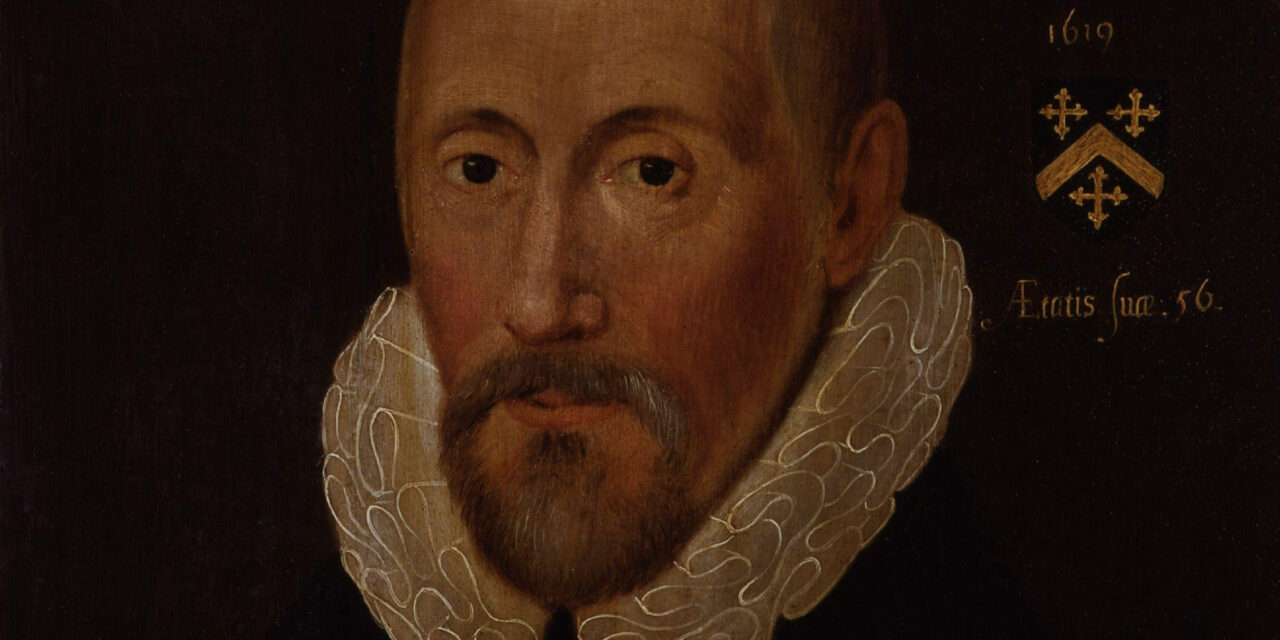 [In our last two posts, we examined the religious and political climate at the time of the coming of King James I to the English throne (here), and presented the full text of the Millenary Petition (here). In this post we will zoom in on the creation of the Petition and ask what impact it had.]

Discontent is a universal human experience throughout time. How it comes to expression has a more complex history. The digital world in which we live has made “complaint” a fairly common and astoundingly easy task. Amazon reviews can be penned in seconds from a smart phone (they even send a link directly soliciting your opinion). All manner of social networking apps allow you to rate people, places, and services, with whatever rank of “stars” you wish, with comments included. That’s to say nothing of now almost antiquated methods of complaint, like writing an actual email to a support address, or, if anyone remembers how, penning an actual snail-mail letter. (I’ve read that it involved some kind of barbaric murder of trees, then stuffing their dead carcasses with lead, which were then used to bruise and leave marks on other parts of their dead family members’ mutilated carcasses. Somewhere there was some savage-like licking with the tongue involved.) Of course, all such methods are only effective if someone is willing to listen, and the methods quite frustrate themselves and their users when the one being complained to simply turns a deaf ear.

The Creation Of The Millenary Petition

In reality, new technology has only facilitated formal complaint; it did not invent it. Forums in which to express discontent existed in late Elizabethan England as well. We are not so different from them as we might like to suppose. As we have explained, there was a wide spectrum of discontent hiding under the surface of the Church when James VI rode south to accede to the English throne; some of it far more weighty than what you wrote in your last Amazon review.

The so-called Millenary Petition, technically titled, The Humble Petition Of Ministers Of The Church Of England, Desiring Reformation Of Certain Ceremonies And Abuses Of The Church, was one of about a half dozen petitions reportedly made to James while he was on his way to London from Edinburgh for his coronation between 4 April and 7 May 1603. It was most likely devised and drafted by Author Hildersham, probably under the influence of Stephen Egerton, a kind of “party leader” of the moderate non-conformists at the time (Fuller connected both names to it, though he also confusedly thought it was finished after the Hampton Court Conference rather than before it). Hildersham may even have been among those who presented the Petition to the king, though the circumstances of the presentation are shrouded in uncertainty.

But what was the result of their Petition?

The Impact Of The Millenary Petition – New Proposals

Most writers have taken it as common knowledge that the Petition (which, contrary to its own claims and its later ill-adopted nickname, was not signed by anything like 1,000 ministers) was the cause of the calling of the Hampton Court Conference in 1604 at which the King James Bible was ultimately conceived.

Derek Wilson in his popular history is one of a dozen modern examples stating the common view that, “they asked the king to summon a conference at which all the abuses in the religious life of the nation could be discussed,” and even claiming an emotive impact of the Petition on the king;

The king welcomed the Millenary Petition. He was flattered to be invited to sort out the religious differences within his new kingdom. He would, he decided, begin his reign with a gracious irenical initiative to bring peace and unity to his subjects. He pondered the petition during his leisurely southward progress during the summer and it was while he was staying with the earl of Pembroke in his Wiltshire home, Wilton House, on 29–30 August 1603 that he gave orders for a meeting [the Hampton Court Conference], “for the hearing, and for the determining, things pretended to be amiss in the church”.

Yet William Craig has recently argued (in a lecture here and a more academic article here), quite the contrary. He suggests that James actually called the Conference of his own accord, that is was not a response to the Millenary Petition, and that it was not so much an attempt to hear Puritan complaints as it was an attempt to ensure that Puritans would stay under his thumb.

It is all very well to say that “It is well known” that “the Hampton Court conference resulted from King James’s favorable response” to the Millenary Petition’s request for a conference, but if this knowledge has no contemporary evidence to support it, then historians must read the evidence again…. Although we cannot know it beyond doubt, it seems likely that the conference was the king’s own idea.

He raises a number of factors to support his claims. Some of the most important can be highlighted here (citing from his journal article). First, the king already had a well-established track record in Scotland of calling such conferences when he saw issues that needed handling with a royal touch. This was his regular M.O., and he needed no outside impetus to prompt such an action. Indeed, he called three of them in 1604 alone.

Second, the language of the Petition that has been cited as requesting the Conference (“…if it shall please your Highness further to hear us, or more at large by writing to be informed, or by conference among the learned to be resolved…”) is exceptionally vague. “Conference” is only one of three different proposals, and in any case, “In the early seventeenth century, ‘conference’ could mean anything from a simple conversation to a formal meeting between representatives of the two Houses of Parliament” (pg. 55).

Third, the surviving invitation of participants to the Conference makes no mention of being a response to any Petition. It seems to assert rather that the Conference was at the king’s own wish. “It does not refer to the Millenary Petition, but says that the king wished ‘to confer and advise with some of the bishops and others of the clergy of this realm, of some matters of importance concerning ecclesiastical causes'” (pg. 63).

Fourth, and perhaps more important, as Craig demonstrates, no contemporary accounts link the Petition and the Conference, a connection only made by later historians. No mention is made of the Petition in the official archives, nor even in contemporary histories as related to the Conference. No mention is made of it in the official account of the accession, despite its narrating some five petitions made during the journey of James to London. In fact, even in later accounts, the given date and location of the presentation of the Petition is amazingly inconsistent and unsettled; not what one would expect from a Petition so impactful as to have moved to the king to call a major royal Conference to resolve it.

Fifth, the Conference itself doesn’t appear at all by its format to have been intended as a means to hear Puritan complaints. Almost twenty some odd “avant-grade conformists” (to use another historian’s term) were present while only four Puritan delegates were present, and these four were only allowed at one day of the Conference, the king hearing from the bishops and making decisions entirely without them the rest of the Conference. As has been noted before, “The conference…made it perfectly clear that James was on the side of the Establishment and expected all others to conform, crying out that if they failed to do so ‘I will harry them out of the land, or else do worse.’”

Craig concludes that, “The simplest reading of the evidence is that James called the conference at Hampton Court because that was his usual method of dealing with difficult questions in church and state, and not because he was asked to do it” (pg. 69-70). He may be slightly over-pressing his point in his attempt to re-evaluate the Hampton Court Conference itself, but he at the very least raises concerns about connecting the Conference and the Petition too strongly, and gives clear reason to question the role of the Petition as the solitary cause of the Conference.

The Continuing Relevance Of The Petition

Craig’s proposals do not seem to have yet made much impact in scholarship on the English Reformation or early Stuart politics, if one judges by how often the connection he argues against still gets asserted or assumed. However, even if the casual connection between the Hampton Court Conference and the Millenary Petition is in some doubt (or even severed), it still seems clear that William Barlow alludes to the Petition at several points in his “Sum and Substance,” the semi-official account of the Conference. He describes the four Puritan representatives (Reynolds, Sparkes, Knewstubs, and Chadderton) for example as, “Agents for the Millene Plaintiffs” (Barlow, pg. 2).  He also describes how, while Reynolds was making his case to the king, Richard Bancroft, Bishop of London and the arch Anti-Puritan (and shortly thereafter, Archbishop of Canterbury and the major architect of the King James Bible), rudely interrupted him, and knelt down before the king dramatically, begging that no more should be heard from these schismatics. He presented three reasons why. His second reason was;

…that if any of these parties were in the number of the 1,000 Ministers, who had once subscribed to the [Book of Common Prayer], and yet had lately exhibited a Petition to his Majesty against it, they might be removed and not heard, according to the Decree of a very ancient Council, providing, “that no man should be admitted to speak against that, whereunto he had formerly subscribed.”

This argues that the impact of the Petition was clearly felt at the Conference. Yet it also further supports Craig’s claims. If the Conference had been called to hear the complaints of the Petition, it would hardly make sense to ban anyone from speaking who had signed it! As Craig notes, “These references, which seem to refer to the Humble Petition, show that Barlow and Bancroft considered it the centerpiece of puritan agitation, but not that they thought the conference had been called as a response to it” (Craig, pg. 51). Craig’s argument does not so much sever the connection between the Petition and the Conference as weaken it. Or more specifically, remove its casual elements, urging us to speak in more nuanced ways of the connections. The Petition was still, “the centerpiece of puritan agitation,” which was put on dramatic display at the Conference.

It remains an important window into the exploding controversy between non-conformists and avant-grade conformists that was first publicly showcased at the Conference which conceived the King James Bible, partly as an ultimately failed attempt at bringing uniformity to that controversy. Though it is important to remember that the Petition itself makes no mention of a new translation, which was probably at that point only desired by the King himself, being little more than a gleam in the Puritan eye. It is worthy then of investigation as a source that reveals something about the soon-coming birth of the KJB, and is worthy perhaps of yet one more post (if I try not the reader’s patience) to examine its structure and content.

Posts On The Millenary Petition 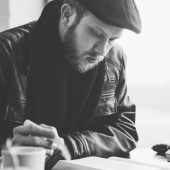 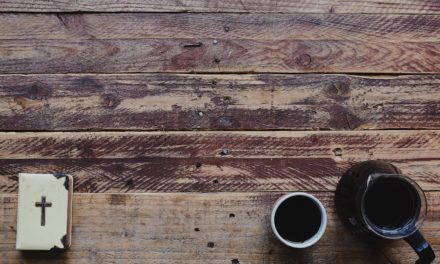 A Misguided Command To “Abstain” In The KJV (Part II) 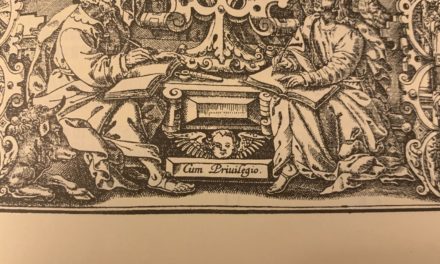 The KJV Copyright – A Sordid Tale Of Intrigue And Avarice 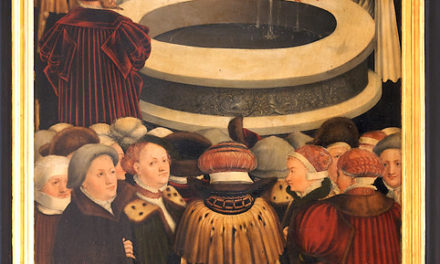 Acts 8:37 And Infant Baptism In The King James Bible 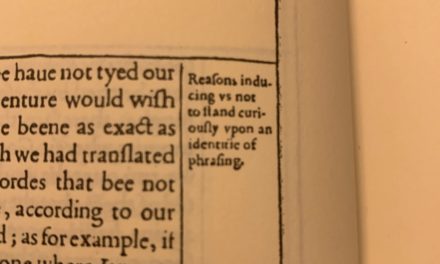